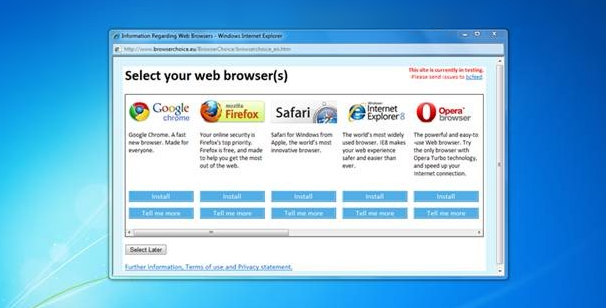 Microsoft is to learn the hard way that “a deal is a deal,” at least in the eyes of the European Union, by being forced to swallow a massive fine for breaching earlier promises made with the 27-nation bloc.

The software giant has been fined 561 million euros ($731 million) by European authorities for falling foul of previous antitrust settlement conditions.

The software giant breached a settlement that it signed with the European Commission in 2009, which mandated that it display a “browser choice” screen on all existing and new PCs in the region.

“In 2009, we closed our investigation about a suspected abuse of dominant position by Microsoft due to the tying of Internet Explorer to Windows by accepting commitments offered by the company.”

He added: “Legally binding commitments reached in antitrust decisions play a very important role in our enforcement policy because they allow for rapid solutions to competition problems. Of course, such decisions require strict compliance. A failure to comply is a very serious infringement that must be sanctioned accordingly.”

A Microsoft spokesperson in Brussels said in an e-mail to ZDNet that the company takes “full responsibility for the technical error.” He added:

“We provided the Commission with a complete and candid assessment of the situation, and we have taken steps to strengthen our software development and other processes to help avoid this mistake — or anything similar — in the future.”