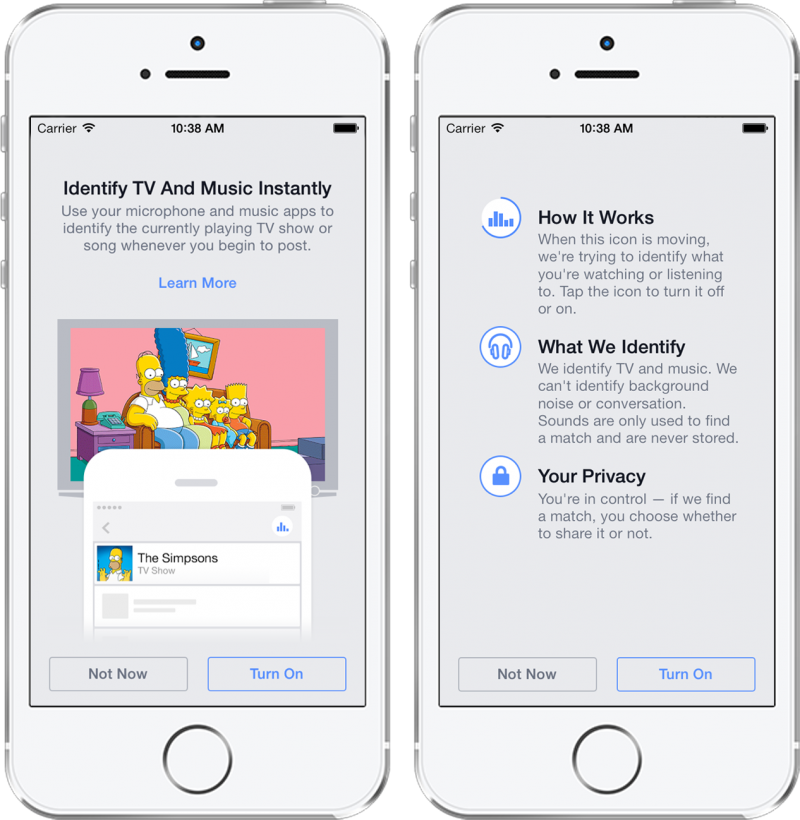 Today (21-05-2014) Facebook announced a new feature for its Facebook app that can automatically identify music and TV shows playing in the background as you’re writing a status update. When you activate it, the opt-in feature uses your smartphone’s microphone to scan your surroundings; you’ll see a sound icon moving on the screen as it does. If the Shazam-like feature finds a match, you can share songs or shows with your friends as part of your update.

Facebook says it doesn’t store any of the sound it analyzes, and emphasizes that “we can’t identify background noise or conversation.” (That’s presumably a matter of intention and not capability.) The feature, of course, will know what you’re watching or listening to, which serves Facebook in its battle with Twitter to become the best “second-screen” app that people use for discussion while watching TV.

Any identified music you share will give your friends a 30-second song preview. Facebook will also post the exact season and episode of a show you’re watching if you share it, although the social network also makes the oddball claim that such sharing will somehow allow you to “avoid any spoilers and join in conversations with your friends after you’ve caught up.” Apparently Facebook believes that your friends and commenters are all people of goodwill who will conscientiously avoid revealing stuff you’d rather not know yet.

More detailed data on the entertainment you enjoy will also be a boon for advertisers and Facebook’s media partnerships. The company already sends reports to top networks about what Facebook users are talking about on any given week—access to better entertainment data could get more people to pay Facebook for access to your eyeballs.

← Prev: All Your Files Belong To Dropbox Next: Meet Android Intents, The System That (Sort Of) Recreates The Web—Using Apps →