All Your Files Belong To Dropbox

Dropbox now has 275 million users, most of them consumers who use the service to store their personal files and images. But it’s precisely its popularity at home that could help Dropbox at work, as the company pushes out its latest Dropbox for Business update on Wednesday.

All Work And All Play

Last November, Dropbox announced some long-awaited updates to Dropbox for Business. The most crucial one was a tweak to Dropbox’s familiar, simple interface: In place of the single desktop file folder labeled “Dropbox,” business users would find two folders, one labeled “Personal” and one named after their employer.

Those updates are now live. Dropbox users whose workplace has paid for the service can share pictures, videos, documents and other files, switching between work and personal files without having to juggle two accounts. At the same time, their employers can manage their work files without touching their personal files.

In the past, Dropbox customers had to switch accounts, use kludges like Chrome’s incognito browsing mode, or just mix together personal and business files. While it seems obvious that people might want to share all kinds of files with Dropbox, accommodating this scenario was actually quite a technical problem for the company. It required a full-scale rebuild, according to Ilya Fushman, head of Dropbox for Business.

That rebuild frees up Dropbox to build new features, while keeping most of the simplicity Dropbox is known for. In the place of one folder for all your files, there are now two.

Its rollout comes at a critical time. While Dropbox retails storage services to consumers and businesses, Google, Amazon, and Microsoft are slashing prices for wholesale storage. In the short term, this seems like it should be good for Dropbox, dropping the price it must pay Amazon and other service providers for storage and bandwidth. In the long run, though, it seems inevitable that those savings will get passed on to consumers, challenging Dropbox’s pricing.

Box, a Dropbox competitor who recently filed to go public, is emphasizing its collaboration features and industry-specific apps built on its platform. Meanwhile, Google and Microsoft have their own Dropbox competitors, Google Drive and OneDrive, which they are weaving closely into their own suites of online apps. 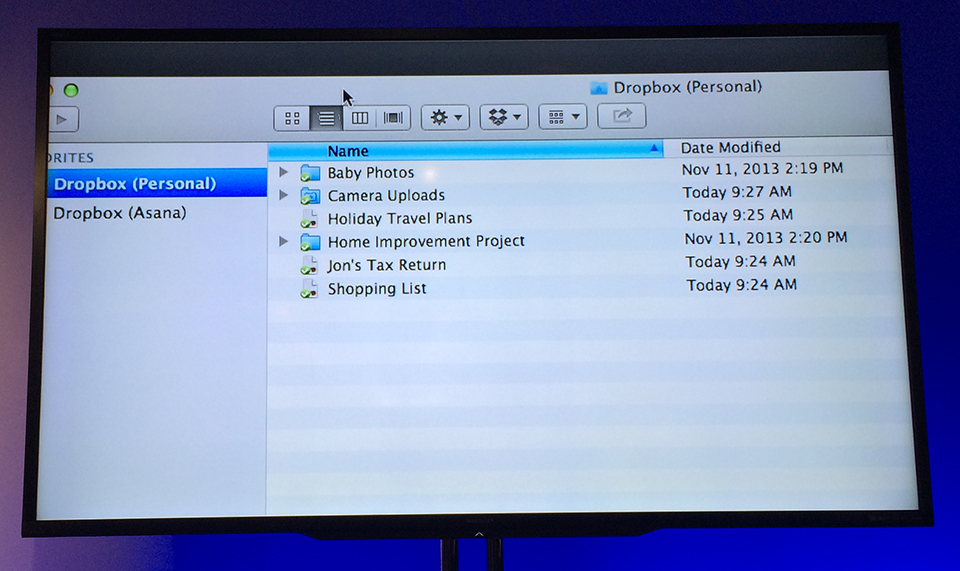 Dropbox’s account-linking strategy takes full advantage of its biggest asset—its 275 million users, whose ubiquity is a big reason why it’s worked its way into businesses in the first place. People use the tool they’re familiar with in the workplace, and when they need to share with contractors, partners, or other outsiders, the odds are good that they, too, have a Dropbox account.

All those consumer accounts—most of them free—still have value for Dropbox. They are word-of-mouth marketing for the brand and built-in leads for its salesforce. That’s why Dropbox is a prime example of how a consumer-friendly tool can work its way into businesses.

Still, some workplaces ban Dropbox, fear that files will leak out through it. Can Dropbox find its way into these locked-down environments with complex security requirements?

It already has in some cases. Here are some of the features Dropbox has rolled out, in the hope of getting a slice of the IT budgets currently going to giants like IBM and Microsoft:

Even with these new features, Dropbox faces an uphill battle in courting businesses against Box and Microsoft, which have more feet on the street calling on large businesses.

Microsoft is the real power when it comes to documents, thanks to its Office suite, where so many work documents begin. Office is increasingly tied into OneDrive, the company’s file-sharing and -storage service.

It seems unlikely that Dropbox will hire a large army of salespeople to respond. It still has more jobs listed for engineers than for salespeople—and its sales openings include titles like “sales engineer” and “solutions architect.” While others sell, sell, sell their products, the updates to Dropbox for Business represents a bet that the company can engineer its way to customers’ hearts—at home, and at the office.

Really terrible Photoshop, for which he apologizes, by Owen Thomas for ReadWrite

← Prev: The Internet Of Things: The Real Money Is The Internet, Not The Things Next: Facebook Can Now Spy On Your Surroundings Via Your Phone's Microphone →